When your son is going to a girl’s birthday and has reached that certain age when small-kid-stuff is no longer an option as a gift and buying something isn’t either (because it would be tremendously embarrassing if anyone might think he has a crush on the girl!), I found it to feel a bit shallow to just tape a coin in a card.. So as he was invited lately, I asked if I should crochet a little purse to hold the coin, it was totally okay with him (and not embarrassing at all!). The Tiny Coin Purse turned out really nice, so I decided to share the pattern, as others might just need one too as a gift or to hold a cart coin in your keychain!The pattern is free to use, as long as you do not pass the pattern on as your own! Throw a link to bymami.dk instead and keep the free patterns coming!.

YOU WILL NEED
Cotton yarn in the colours of your heart’s desire (i used the delicious danish brand Karen Klarbæks Color Cotton)
A hooksize 3.0 mm
An embroidery needle for fastening ends
A pretty button
A keychain (optional)

BEFORE YOU BEGIN
The purse consists of two squares, one of them with a flap. They are sewn together, wrongsides facing each other, using the overcast stitch. If you want to use the purse as a keychain, chain 24 or make a strap using fingerknit (see how to here) and attach it on the inside stitchingon either side.
Every round ends with a slip stitch to the first stitch.

The last part is only crocheted on one of the squares (this is the row the flap wil be crocheted onto):
Sl st in ch, [ch 1, 1 sc] in ch of first corner, 13 sc, sc in chain on other corner. Break yarn and fasten all ends.

Flap
The flap is crocheted in the same direction, from right to left (except the last row of slip stitches that are crocheted ‘backwards’), and colours are changed after every row. You can also choose to break the yarn and do the last round of slip stitches in the same way as the other rows, but that will give you more ends to fasten!
Attach yarn with a sl st in the 5th sc. Crochet 2 hdc tog into the 8th, ch 1. [2 hdc tog, ch 1] 3x. fasten with a sl st into the 11th sc.
Next, fasten yarn with a sl st to the 2nd sc. Put 3 dc tog into the space between the sl st and the 2 hdc tog. Ch 2. *4 dc tog in next chain, ch 2* 3x, 3 dc tog in sp between the last 2 hdc and the sl st.
Fastn yarn on the side of the square with a sl st in the 1st sc.Put 3 hdc in space between sl st and 3 dc tog. In next two ch spaces, 4 hdc in each, ch 1, 4 hdc in next two ch spaces, 3 hdc in last space between dcs and sl st. Slip stitch into the last sc (15th). Turn work (wrongside facing you) and crochet slip stitches ‘backwards’ by inserting the hook from the backside, yarning over and pulling through both loops on the hook. Continue until the ch1 space where you put a sl st, ch 8, sl st in ch. Continue with the backwards slip stitches until you reach the end of the row.

Assembly
Hold the two parts wrongsides facing and use the overcast stitch in the inner loops to sew the three sides together. Attach a pretty button on the square without a flap, put in a coin or two and you’re done!! 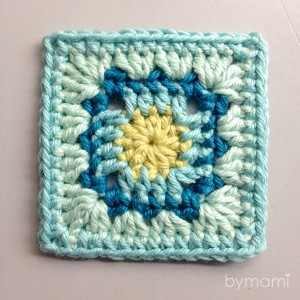 All you need is two squares. 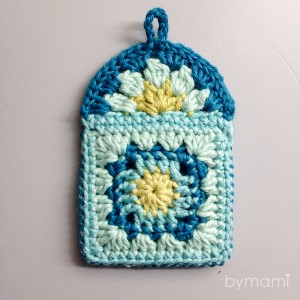 One with a flap and one plain square. 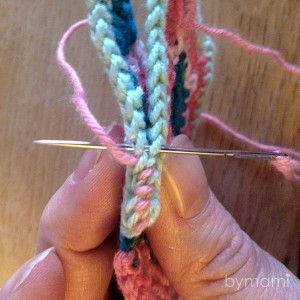 Use another color when sewing in the inner loops only for a contrasting effect! 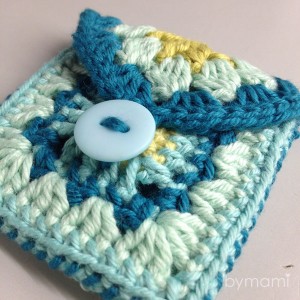 All done and ready to be gifted! 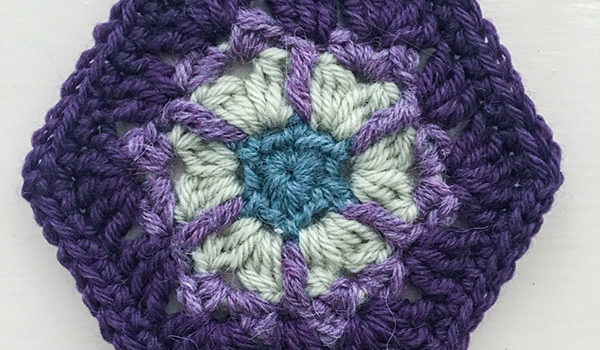 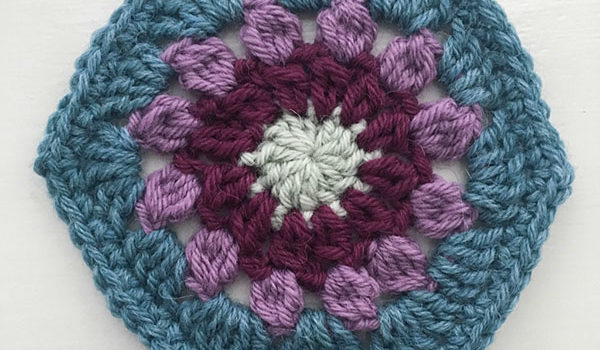 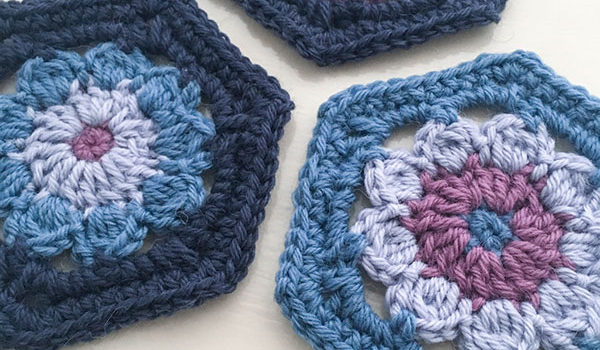 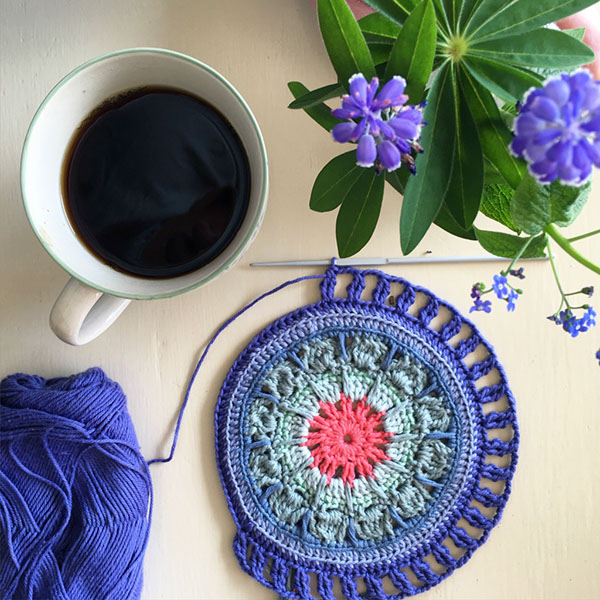